Skip to content
Step one on the Anglo-Saxon Tour – Zurich. Okay, that technically isn’t ON the tour, but since my Beloved has business here, we’re stopping off for a few days.

We landed about 9:00 a.m. yesterday and, because our room wasn’t ready yet, we took a walk through the nearby lakeside arboretum. The mature beech trees form a spectacular canopy overhead and I was most curious to see that several of the trunks, some at extreme heights, were wrapped in bamboo. If anyone has any idea why this might be, I’d love to know.

Then back to the hotel room for a well deserved nap. My lord, what is it about Europeans? The beds remind me of a couple of unfortunate friends I’ve known over the years who’ve spent time in prison. Concrete. However, they (the twin beds, not my jail-bird friends) are covered with the sort of fluffy eider-filled duvets that trick you into thinking of clouds while you’re lying on cotton-covered granite. Never mind. I took an Aleve and fell asleep.

Later, a walk through the old section of the city, where we stumbled across the house Lenin lived in at Spiegelgasse no. 17 house, in 1916-17.

This is the same street where the Dadaist movement was launched in 1916, by Hans Arp and Tristan Tzara in a cabaret. The small square on which the rather grey house sits is filled with trees, and shaded benches, a bubbling fountain, beautiful cobble-stones, a collection of houses with graceful lines, brightly-colored shutters and window boxes. Although I’m sure the square has changed considerably since 1916, surely it must still have been at least almost as restful and delightful to the eye. You’d think Lenin would have been a cheerier chap.

Dinner at a delicious Thai restaurant which had a real non-smoking section (instead of the typical European non-smoking sections where they take the ashtray off your table and smile proudly at you while handing a cigar to the fat business man to your left). Delicious food and early to bed.

This morning, with an aching back from the concrete bed, I drank delicious coffee with hot milk in the hotel restaurant and went to ask the concierge about where I might find James Joyce’s house. A cute girl of about twenty-five, with the blondest hair I’ve seen in years, looked at me blankly. Who? Joyce, I said. James Joyce. More blank. Shrug of shoulders. Purse of lips. “You know,” I said helpfully, “Ulysses? Dubliners? Finnegan’s Wake?” “Sorry,” she said. “But I can look it up on the internet for you.”

After doing my own internet research, I set off on my quest for the ghost of James Joyce, who lived, died (after an intestinal operation) and is buried here. I set off on a pleasantly-chill morning, first to find the James Joyce Pub, on Pelikanstrasse 6.

An aside here. I am not a great tourist. I find wandering through unfamiliar streets a slightly unnerving experience. I feel strangely vulnerable and oddly exposed, standing on street corners, map in hand, looking generally baffled. I never like getting lost, and I always do, so I stop every corner or so, checking to make sure I’m walking in the right direction. As I cross streets, I imagine getting hit by a car, ending up in a hospital where I don’t speak the language, and having no way to get in touch the The Beloved. And this is in Zurich, for heaven’s sake, not Uzbekistan. I harbor exquisite envy for friends of mine who ramble through all sorts of exotic locals, looking only for adventure and new experience, never fretting about clean toilets and smoke-free restaurants where they know who to make a decent cup of tea. Good grief, I’m turning into my Great-Aunt Lil from Chesterfield, England!

And yet – off I go. I arrived at the James Joyce Pub to find it still shuttered, although they apparently serve “James Joyce breakfasts.” Well, must be late breakfasts, since I was there at 11:00. This is where the James Joyce foundation members apparently meet, on Thursday evenings, and is supposed to be an ‘authentic’ Irish pub. Peering in the window, it looked as though it might be authentic to modern-day Dublin, although I suspect James would frown at all the chrome and glass. I’ll try to get back to take a look inside when it’s actually open, but I’m dubious.

I wandered over to the churches the Beloved and I had tried to get into yesterday (only to find that churches are apparently closed in Zurich on Sunday afternoons!). In the Fraumunster, I was stunned by the spectacular Chagall stained glass windows, and as fate would have it, I managed to stand there for a few moments, alone, in between swarms of tour groups who apparently can’t read the ‘silence, please’ signs. As I turn to leave, I see a small sign saying “prayer area” and an open door leading to descending stone steps. Below is a space of diffuse light from a tall clear window behind a large stone font. On the font’s water float lighted candles. A well-worm carpet is on the floor, and there are cushions, prayer stools, or simple chairs to choose from. I choose a chair near the wall and bow my head. Silence. Breath. Companioned solitude. When I finish praying I light a candle and float it on the surface of the water. 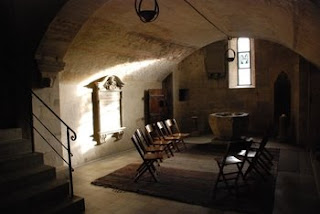 A little distance away I pass another, smaller Protestant church and hear music. I walk up the steps and stick my head in, only to find the jazz vocalist Jay Clayton rehearsing for tonight’s concert with full orchestration, including a brilliant trombonist and an off the hook drummer (along with violins, piano, bass, cello, etc.) I stand and listen from just inside the door for perhaps 15 minutes, until I catch the eye of the sound tech, who gestures me in, finger to lips. The next hour is spent in musical ecstasy as I’m treated to what is essentially a private concert. At the end of an hour I leave my card with a thank-you/danke! scribbled on it and return to the street with a joyful heart.

Which I when I realize I’ve forgotten my wallet, with all my money and my identification, in the hotel room. More visions of lying unidentified in hospital rooms. So, it’s back to the hotel for my wallet, a nap, a little reading on the balcony, on which stand four huge pots of lavender plants, and Joyce gets put off for another day.

This sort of day is the best of travel for me — where I allow myself to be led by intuition from one turn in the alley to the next, and happy surprises abound.