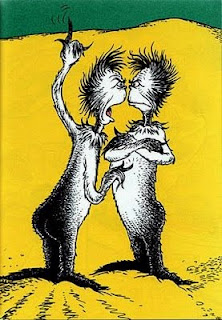 I will not stand and fight all night. I will not shout, YOU’RE WRONG, I’M RIGHT!

A few years ago, my Best Beloved and I had an argument. It was a real corker, a rip snorter. Tears were shed and doors were slammed and some very unhappy things were said.

My Best Beloved had, some years prior, promised me that by a certain date he would see to it I had a little place of my own, a little cabin in the woods somewhere, or by the sea…a place to call home. That date had come and gone, and he had not made good on that promise, nor did he understand what the big deal was, since we were leading a terrific life, in PARIS, for God’s sake, and why wasn’t I appreciative?

Now, I do understand that he had a point, and furthermore, it is not the responsibility of My Best Beloved to buy me a little cabin in the woods, that if I want one so darn bad I should just go and work hard and save some money and buy it myself. But he’d promised, you see, and I’d believed him.

I thought he understood how important it was to me. I have this thing about home, a fear of never finding a home, or of losing my home, which no doubt stems from being raised in a family where my mother often feared she would, because of my Dad’s alcoholism, lose hers.

We both lost our emotional balance in the midst of that argument. Thank God, we loved and respected each other enough to not merely list all the other person’s faults and shortcomings and become immovable in our positions. We loved each other so much that we wanted to see where our own faults lay and we looked for common ground, for shared values, trying to figure out why the other person felt the way they did.

I still don’t have that little cabin in the woods, but I don’t feel so much like I need it any more. I feel safer in the world, due in large part to My Best Beloved’s capacity to love me for precisely who I am, flaws and all. I know my home isn’t really found inside a structure, but rather in the condition of my soul in relationship to all Creation. Maybe I’ll find a little house by the sea one day, or on the top of a mountain… it will be nice, but I don’t NEED it anymore, because the fears that drove the need are (pretty much) evaporated.

In these times, when people are hollering in the streets, waving signs (and occasionally guns) and calling their neighbors all manner of nasty names, it’s not easy for any of us to maintain an emotional balance, but I’m certainly trying.

In short, I’d like people not to be so frightened. That’s right, frightened. Just as with that old argument between My Best Beloved and me, I believe fear is at the root of all such bad behavior and always has been. Fear of change. Fear of the other. Fear of losing something. Fear that there are only so many seats on the bus, that there isn’t enough of the good stuff of life to go round.

I think the argument most people are having in this country isn’t really about health care or who has the right to talk to school kids; it’s about deeper fears. Fear of death. Fear of poverty and want. Fear of being excluded. Fear of losing control.

And sadly, most of the people who seem to be the most afraid are people who say they’re Christians. What does that say about the quality of faith in this country? I’m not suggesting we shouldn’t speak up if we feel there is an injustice in the world, or in our homes, for that matter… what I’m saying is that the level of fury and venom (not to mention weird misinformation) by people like Rush Limbaugh and Glenn Beck (who I really think should talk to his AA sponsor!) indicates these people feel they live in a dangerous and uncaring universe, in which they are pitted against enemies at every turn. They behave as if they’re being attacked and that they are utterly undefended.

Really? That’s not what my experience of God has been, even when bad things have happened to me, and believe me, like everyone else on the planet, bad stuff has happened to me and the people I love. But even in the midst of bad stuff, I sense the God of my understanding is so vast, so mysterious, and so present, everywhere, always, that I feel as though I have a Companion on this journey and that this journey has a point to it.

In a wonderful sermon by Ian Lawton of Christ Community Church he says:

Susan Jeffers wrote a powerful book called “End the Struggle and Dance with Life”. In the story, an old woman is asked why she is always calm and cheerful. Her answer is beautiful. “Well, I wear this world just as a loose garment.” To wear the world as a loose garment means to embrace life with passion, but neither to smother it, nor be smothered by it. Wearing the world as a loose garment speaks of comfort with what lies beneath, accepting life is it evolves, but not expecting it to stay the same. It implies no judgment, for everything is as it should be.

Wearing the world as a loose garment is a metaphor for holding the balance between embrace and detachment, intimacy and autonomy, the present moment and impermanence.

In striving for this balance, you discover within all the help you ever wanted and all the comfort you ever desired.

If you want to name an experience God, then you are free to do so, but know that it is only a name and putting a name on God is as restricting as putting an elephant in a rat’s bathing suit.

That’s my experience of God… a realized experience… if I am in good spiritual condition I have a sense that all is as it should be; there is no need for all argument. I will talk with you, respectfully, about what I think and what I believe. I hope you will let me know, respectfully, what you think and what you believe. Then, perhaps we’ll even stop being afraid long enough to be kind to each other..

Posted in "The Other" (Us vs Them), Spirituality, The World, The News & My Opinions On Stuff (for what it's worth), Writer's Mental Health