It’s Easter Sunday morning and I am sitting behind my house, near the liminal space marking the border between the garden and the Wild Wood. Can you see that little face? Photo by Ron Davis

I am watching for the foxes. The vixen and her three kits.

For several years a family of foxes has taken up residence in the complicated, many-entranced den where once the groundhog lived.

The light here is dappled, sparkling through the almost-unfurled pale green leaves overhead. It is deliciously warm, but not too hot, and since most everyone else is off at church, it seems, it is luxuriously quiet. The birds sing, though. Music from wrens, the harshly hilarious cawk of crows and woodpeckers, the twitter of sparrows and robins and tits and cardinals and the bully-cry of bluebirds. The air smells of the heavy rain we had yesterday, a whiff of frankincense I burned to honor the day, the rich promise of warming earth, and a tiny whisper of musk from the fox den.

Be still. I tell myself. Be here.

If I want to visit with the foxes now, I must be close, less than seven feet. As close as I can get without breaching the boundary. Beyond that, they are just a rare, nearly-invisible flash of brownish red next to the rust-colored earth and the veil of green that sprung up over the past few days.

And then, up pops a wee head with black-tipped ears. I make a tiny clicking noise with my tongue. The kit, being the more curious of the three, tilts her head this way and that and then hops forward a few feet to the top of the den and sits up as pretty as any Crufts Championship terrier.

We gaze at each other for a moment or two. The pup sniffs the air. Sniffs me, really. Then, seemingly satisfied I am not a threat, plops down just as my dog does, with head on paws, and goes to sleep.

Is there anything more holy than a wild creature sleeping near you, trusting you are not foreign, but family? Not foe, but friend? 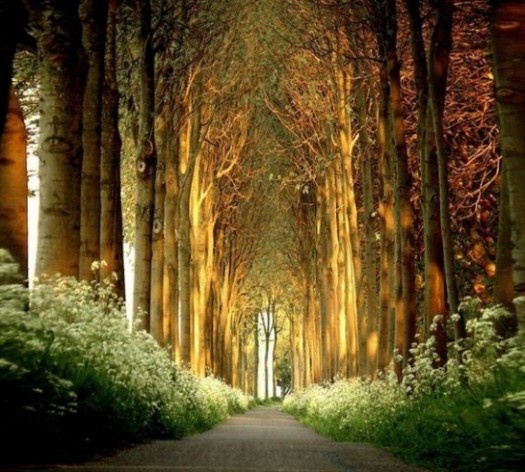 I know a woman, Sister Rita, SSJ, who tells me the woods, the wild places, are the first Cathedrals. I believe her. That’s been my experience. It only follows then, that the wild things who live there are the angels and saints, sculpted, painted by the Creator’s hand, God and Goddess both.

It’s been a difficult period. Friends have been suffering terribly from depression, friends have passed, others grieve. It is the anniversary of the death by suicide of my two brothers. There have been catastrophic fires in Louisiana black churches and a Paris cathedral. Today bombs exploded in churches in Sri Lanka, killing many. Politics have become cruel, as fascism and racism and bigotry and misogyny take hold. Holy families are turned away from man-made borders.

And yet, life returns. Back in that deepest mid-winter night, when that first glimmer of returned light was noted, we were promised it would come back to us, and now, here it is.

In the face of a small, sleepy fox cub, I see the promise fulfilled. Look, it says. Listen, it says. Notice and be still. The cycle returns. I left so that I might work on behalf of Life, and now the work that can only be done in the darkness is complete, and I return, as I will, always and forever.

And so I sit and rest and pray with the fox and her children. Grateful and filled with the sanctified world vibrating all around me.

Posted in Connection, Spirituality, The World, The News & My Opinions On Stuff (for what it's worth)